The most recent Phi Delta Kappan issue (December/January, 2017) contains an excellent article championing the cause for high schools to start school at later times. The idea isn’t new, but the research keeps getting more convincing that a later start time is certainly in the best interest of  students and carries many benefits for them. This article, written by Kyla L. Wahlstrom, looked at some earlier studies in Edina and Minneapolis schools. The author points out that what we know about the teenage brain is that the need for more sleep is “a matter of biology, not choice,” and many teens are not able to fall asleep before about 10:45 p.m. and remain in a sleep mode until about 8 a.m. This appears to be connected to the circadian rhythm and is directly related to hormonal changes during puberty and eventually disappears as teens enter their 20s.

Wahlstrom points out that medical research (Carskadon, Acebo, & Jenni, 2004; Jenni Achermann, & Carskadon, 2005) shows negative effects of sleep deprivation such as depression, obesity, substance use and abuse and increased car crashes (this should concern all of us!). Early research showed that absences, tardiness and sleepiness in school had significantly declined with later start times, and that moods and feelings of student efficacy had improved (Wahlstrom, 2002).

Wahlstrom went on to study eight high schools in five school districts in three states—Minnesota, Colorado and Wyoming, from 2010 to 2013 (Wahlstrom et al., 2014). It was found that in those schools that implemented the latest school start times of 8:35 and 8:55 a.m., there was a significant decrease in absences and tardiness in grades 9-12.

Finally, the study indicated that  those students who slept eight or more hours each night were significantly less likely to report symptoms of depression, fall asleep in class, drink caffeinated beverages, have a phone or computer in their bedroom and do dangerous things.

At UNHS, we are fortunate that students who are working through their online courses can choose when and how much time they spend on their coursework. They have much more control over starting their work later in the day to match their circadian rhythms. The ultimate expectation remains the same—the work must get done and having a regular routine study time is an important part of making progress. Aligning a teen’s brain efficiency with their work schedule is a plan for better academic performance. I encourage you to read the entire article in the Kappan as it goes further in discussing how best to approach your school board and community about making a later start time a possibility. It begs our attention. 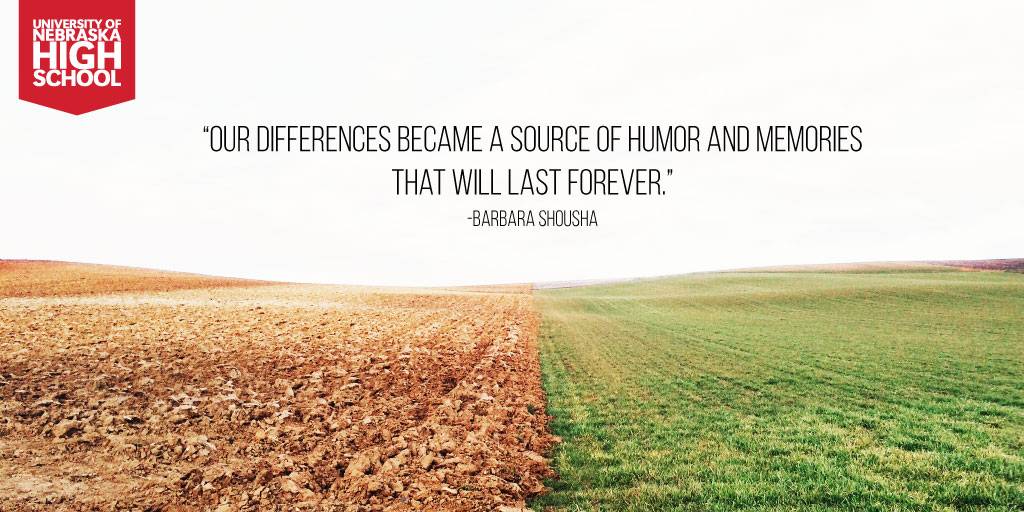 Recently my best friend and I celebrated a special birthday together! It was fun and exciting and a wonder that we even pulled it off. Rarely do you find two friends more different than my best friend and I. She loves adventure while I love the quiet life. She is a night owl; I am a morning person. Her idea of a great birthday included sky-diving and riding roller coasters. My thoughts tended toward art galleries or a contemplative retreat.

Science has proven the benefits of diversity over and over again. In biology, greater diversity leads to healthier ecosystems and increased sustainability. Science also informs us that there are social benefits to diversity as well. The publication, Scientific American, cites research showing that interacting with others different from us requires us to prepare better, anticipate alternative viewpoints and to expect that effort will be required to reach agreement.

This was certainly the case in celebrating our birthdays! Together, we traveled to the Great Smoky Mountains in Tennessee. We were within driving distance of both nightlife and nature. I spent a terrifying afternoon on a ski lift up into the mountains and navigated steep trails on horseback. She indulged me with an afternoon of viewing pottery and a quiet nature walk. We each had experiences we would never have had on our own. Our differences became a source of humor and memories that will last forever. Believe it or not, we both enjoyed the other’s chosen activities, because our different preferences helped us experience things we would not have otherwise.

UNHS courses feature much diversity across the disciplines. In each of the areas of study, there are many different types of courses for whatever your passions are. Check out Biology, World Cultures, Multicultural Literature, International Relations and more.

I hope you have many reasons to celebrate differences in life!

For some of us, a trip back to high school means going back in time, for some (like myself) at least 40 years! What’s interesting though, is that I have a very vivid memory of those high school years. I can easily remember my many wonderful teachers and friends, but it was the high school experience that really stuck with me and pushed me to further my education.

I feel fortunate to be able to hold onto those great memories of fun times and great friends, and not look back wishing that I could redo my experience.

Much of this has to do with my experience during this time. High school was a time of expanding my knowledge base beyond the core academics of English, math, science and social studies. I had the opportunity to obtain a well-rounded public education that included many electives in areas outside my core classes. Forty years later, I am still proud of what I accomplished during my time, but even more grateful for the excellent teachers who invested in me during this time in my life.

To avoid the pitfall of wishing for a redo, I offer this advice: Challenge yourself. Push yourself. Venture into the unknown areas of the curriculum that you never thought you’d try. Take as many advantages of this learning experience as you can, because you can. No one can stop you from trying out for any of the sport teams or plays, or speech debates that are available to all students.

This advice may seem intimidating, but it starts with small steps:

Go out and make it happen.